Since we embarked on this journey, we have received fantastic feedback and involvement from the Woodend community and local business. This has involved numerous face to face meetings with people that use the space regularly.

As with any idea, assumptions are made and things need to evolve.

Various of the committee members of the Woodend Community & Cultural Centre have met with the following groups, which has helped inform the design.

Below are the latest evolution of the proposed concepts and designs that have been created by Architect David Faggetter.

David also took into consideration the feedback gathered from the Community Survey conducted in 2017. This survey was framed upon the original Morton Dunn Master Plan report that MRSC commissioned in 2008.

As a Woodend residence, David’s comments about the evolution below are particularly well informed:

In David’s own words:

Circulation
At a very good meeting with Neighbourhood House, the Tennis Club and the Skate Park people, we tussled with the issues of safe circulation, the status of the fence to the Neighbourhood House land and so forth. I decided the circulation could only be solved by a clear separation of cars from people, so I ran a straight route from road to tennis club and relocated the skate park, envisioning this as a beautiful deciduous avenue leading down to an explicit stop (sculpture?). It connects to all facilities.

To the west of this is a series of car bays, accessed from a road along the west edge.  Ideally the pedestrian spine would be raised higher than the car bays, and separated visually from them by hedging.  There is a set-down at the tennis club, but it would be better if children were dropped off at a pull-in off Forest Road, for them to make a safe trip down the spine, to the pool, tennis courts or skate park etc

To the east there is a one-way, low speed loop road meant for highly restricted use only – school buses, delivery and rubbish trucks, Farmer’s Market stall holders, car club exhibitors and the like. 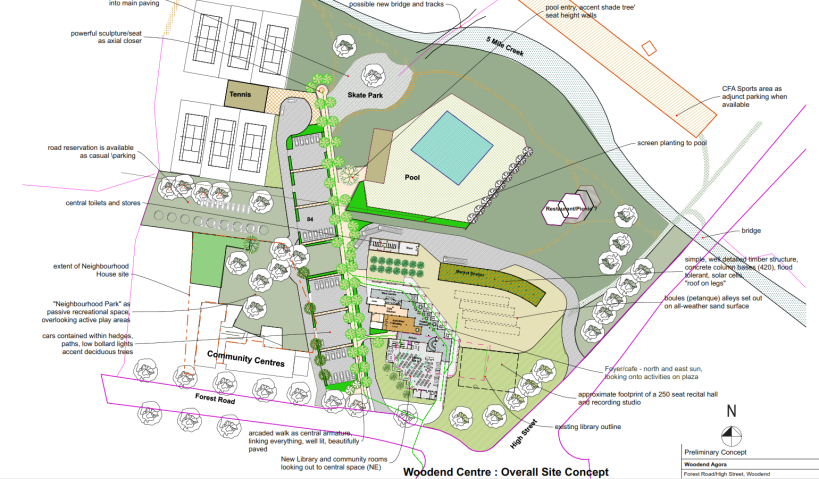 Library
Tara and Lulu have worked up a really good brief for a new library and their suggestions have been worked into a more resolved library plan, along with extra meeting rooms on the upper level.  A 120 person hall has been shown, with appropriate break-out space and toilets, plus lift.  Access to the upper level is independent of the library.  A dramatic curved stair is shown – allowing expansive views of the space delivering a sense of scale and occasion.  This also looks forward to the time when a recital hall might be clipped on to the east – a raked floor would lift people up to the upper floor level – the stair connects them with the foyer/cafe/lobby below.

As an extension of this thinking there is a sprung floor multi-purpose activity room off the Atrium, (which separates Library from the general Lobby spaces ).  It could have out-of-hours access, for the early or late users.  There has been some talk of a child singing space near this and the library, so parents can park children while they browse or meet with friends.  However it is used, the image of family and friends sharing coffee and chat, in the glazed north and east facing lobby, is the sort of community binding role that our scheme could deliver.

Wine Centre/Visitor Centre
This is run along the north face, where the vine clad pergola, which zig-zags down the North East face of the lobby, runs in front, to build up the wine ambience, and to add to the seasonal pulse of bud-burst to autumn colour, which should be a fundamental part of the landscape themes around the site.  This locale doubles as the visitor centre, with place for tourists to sit and read.  A useful size cellar is shown, where local vineyards could place wine, ready for tastings or long table lunch events.  A grove of trees is shown due north, making a natural place for such events, if the weather allows.

Market Hall
This has morphed into a modular, timber framed saw-tooth structure, with solar panels on the sloping, north facing roof, and glass in the vertical south facing side.  Taking advantage of the truss depth, it would be possible to clear-span three bays, making a column free stage area, ready for music or stage events.   The entire structure lands on concrete pad bases about 500 high, both to make informal seats and to lift the timber above the flood levels.  Having no walls, flood water could flow easily through, with no ponding.

The current plan shows a long hall curving at the east, to enfold the Agora space.

This modular structural idea has been used for the non-library part of the scheme, to create an interesting role as a civilised solar farm, generating enough power to run the entire scheme, plus Neighbourhood House and sporting venues.  A battery bank of about 70Kwh could be housed in the store adjacent to the toilets.

Toilets
These are placed in the centre of the overall scheme, convenient for users of the Agora as well as for people walking along the pedestrian spine.

Cafe
A kitchen, store and waste is located behind the wine centre, where it can serve casual meals and coffee into the lobby, but could be used to cater for wine centre events.  Just how a cafe might work will be open to experiment.  The north/east sunny aspect, unique to Woodend, might turn it into a really popular local lunchtime venue.  Car club or bike race days could bring high, short demand.  The eventual arrival of a recital hall, with evening use, might open up a pre-show supper market.  Whatever, I think this should be a loose-fit initial plan, ready for expansion.

Site Plan
The site plan photograph shows how the scheme is essentially a landscape one, until the library/lobby part.  Most of the transformational work could happen with the library untouched.  This brings both risks and rewards.  It may make it easier for the Council dollars to go further initially but it is only on completion of the library/lobby/cafe/wine centre that the thing would really hum.  Our strategy must be to get the entire site developed as a major initiative, properly funded. 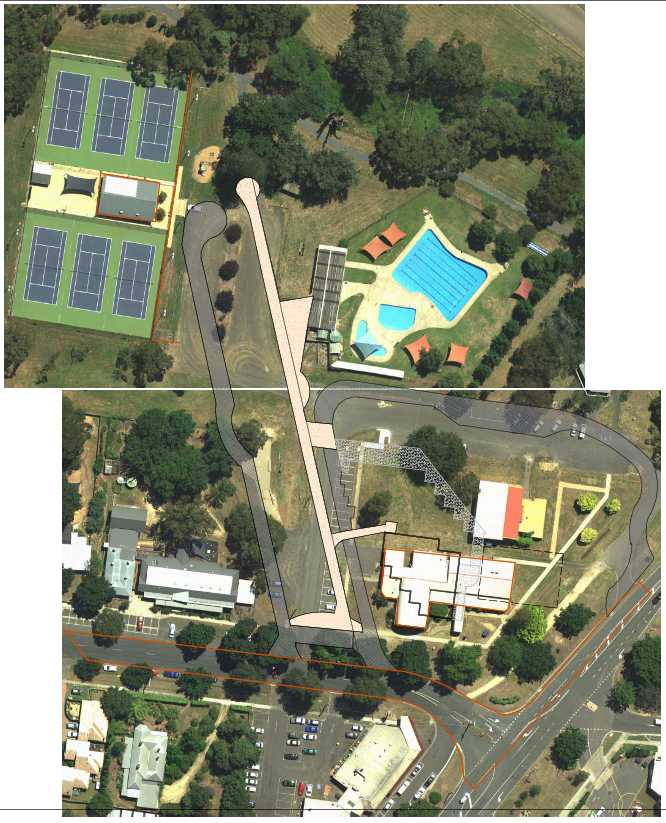